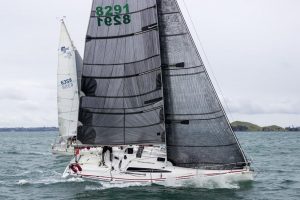 I came to sailing fairly late at the grand old age of 32 having spent most of my younger years involved in Surf Life Saving, Triathlons, and Surfing.

I had never stepped on board a yacht until I arrived in England on my second extended OE in 1990, and it immediately grabbed me as both a great way to see the world and/or compete in events that challenged mind and body.

I started very humbly getting odd jobs on Corinthian boats in the summer sailing seasons, and doing RYA yachting theory courses during the winters, pretending to navigate my kitchen table around La Manche (English Channel) and various habours on both sides of the ditch.

It was inevitable that I would buy a yacht and my first one was an Albin Vega 27 a slow and kindly little tub that forgave the myriad mistakes I made and kept me and the crew safe.

Over time I graduated to a Kauffman 42 which I owned and campaigned for nearly 20 years including RORC series, Fastnet, 3 x trans Atlantics (the first a 2 x handed race from Canaries to St Lucia, the other 2 were solo Westabout and Eastabout). I also did a Solo Transpac. I brought the boat to NZ in 1999 to enjoy the Americas Cup. I also did a couple of solo Tasman’s (2007 and 2010), taking the IRC win in 2010.

In 2009 I came close to gaining sponsorship from a large French multi national to do the Around Alone. I traveled to Paris to discuss the deal and look at IMOCA 60’s available at the time. Alas the company had a bad year and my sponsorship vaporized overnight. Cest la vie!

Now I am focused on NZ and the great racing here in Auckland especially the Richmond Yacht Club Single Handed Series.